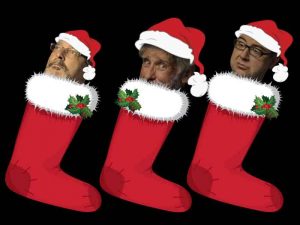 Eccles, Neddy, Bluebottle and all the rest of the Goon Show Live! gang have finally found their scripts and are now preparing for a HUGE opening night tonight at the Metropole Katoomba.

Tonight marks the beginning of our 6th Yulefest Blue Mountains season. It’ll be a night of, Mulled Wine, a scrumptious Goon-type Winter Yulefest Dinner and the very best of British Comedy, all wrapped up in a pretty red ribbon.

…and we have, for tonight’s show only, a very special guest – Mr. Vent Thomas, who toured with Spike as his Stage Director in 1984/5. One New Zealand and two Australian tours. They were his ‘Final Farewell Tour’ and ‘Second Final Farewell Tour’.

Vent will be doing a short interview / Q&A after the show, where he’ll relay some of his memories of trying the ‘manage’ Spike. Read more details here.

As we write and post this article, there are only 7 tickets left for tonight’s festivities… so Book Now and get in on the fun of The Goon Show LIVE! – a night of cult comedy and snappy one-liners which you’ll be quoting for all eternity.