Last night’s Yulefest dinner and show at the Metropole was as CraZy as it gets!

We ended up having to find an IMPOSTER! because our own John Stretton a.k.a. Peter Sellers was struck down by a severe case of the Lurgi the night before and was unable to perform.

So while John was resting up (probably with a Brandy or two), we procured the services of accomplished actor and voice-over artiste Peter McAllum, who stepped up and onto the stage with the rest of the lads… and they had one wild time up there. 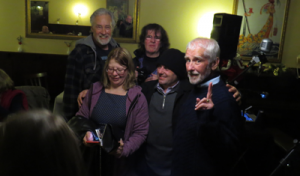 So did the audience given the clamour for photos with the cast after the show. Here’s a pic of few of those fans with our imposter Peter, and Robin (Spike) Queree.

Today’s special afternoon tea and show is on at 3pm… there a few tickets left, which you’d better grab because all the rest of the tickets for next week’s closing show are sold out.

Read about the show | Book Tickets