In March and April 2004, Bryan co-produced and directed ‘Birth, Death and Everything Between’, which opened to critical acclaim. It was not only the press who lauded the show: Sydney’s audiences also bestowed praise well beyond expectations.

With over 80 artworks on display and a theatrical production featuring an ingeniously interwoven pastiche of dramatic and comic monologues, ‘ Birth, Death and Everything Between ‘, was presented at the wonderfully bohemian arts-space, Darlinghurst’s TAP Gallery.

This extraordinary show guided the audience on a journey through the cycle of life. ‘Birth Death and Everything Between’ chronologically charted the 9 major stages of life: Birth, Childhood, Teens, First Love, Marriage & Family, Mid-Life, Retirement, Illness & Frailty and Death.

The fantastic theatre production featured a collection of monologues, song and poetry: including works taken from Foetal Attraction by Australia’s Kathy Lette and Melbourne’s author Helen Garner’s short story ‘Our Mother’s Flood’. Thrown into this eclectic mix was the song ‘One Foot in the Grave’ by Eric Idle of Monty Python fame, and WH Auden’s famous ‘Funeral Blues’ which famously featured in the feature film ‘Four Weddings and a Funeral’. ‘Birth, Death and Everything Between’ also featured dynamic, original and then un-published works by new Australian writers: Vince Melton, Brett Maverix, Tania Yuki and Alexia Kelly. 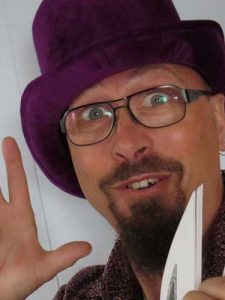